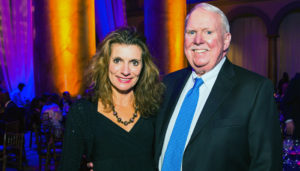 “Art Walsh has quietly and behind the scenes raised more than $1 million for diabetes research through his golf tournaments. He exemplifies the ‘service’ our family would like to honor with this year’s Rapaport Lifetime Service Award.”
Barbara Rapaport

The award comes as no surprise to Art’s many clients, friends, and family. For the past 19 years, Art has organized an annual golf outing to raise money for JDRF and pay tribute to his late brother John, who was diagnosed with T1D at age 11. John passed away in 2000 due to complications from the disease. Art remembers as a child watching his young brother give himself two injections a day and witnessed his lifelong struggle with the disease. Art describes the golf outing as a great way to honor his brother and he credits his friends and clients of the firm for their participation and generosity. This year’s golf event raised $67,585, increasing the total amount raised over the years to more than $1.1 million.

The Rapaport family has supported JDRF for years, serving the organization in countless ways—through fundraising, serving on the Board of Directors, and in other capacities. The Rapaport Lifetime Service Award is presented to an individual who has demonstrated a history of service to the T1D community, prior involvement with JDRF, and a willingness to continue to fundraise for JDRF, specifically through the JDRF Hope Gala (or who has already significantly influenced revenue for the Greater Chesapeake and Potomac Chapter). The awardee is an advocate for the T1D community and shares a common goal to support JDRF and create a world without T1D.

From a young age, Art has been an agent of change. His inspiration for community involvement began with his parents, who encouraged him to work hard and be humble. Like his parents, Art leads by example. Before graduating from The College of William & Mary and the Marshall-Wythe School of Law, Art served as an officer in the U.S. Army, where he was awarded the Army Commendation Medal. In 1983, along with two partners, Art established the firm now known as Walsh, Colucci, Lubeley & Walsh, a real estate law firm with a reputation for excellence and a strong commitment to the communities in which it practices.

Throughout his career, Art has been a mentor and recognized for his contributions to the practice of law. He was voted among the “Legal Elite” by Virginia Business magazine, and consistently named a “Best Lawyer in America” by U.S. News & World Report. In 2015, in recognition of his personal and professional achievements and commitment to his alma mater, The College of William & Mary awarded Art the prestigious Alumni Medallion Award.