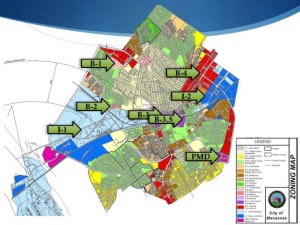 Following a year-long process that included many committee and other stakeholder meetings, the Manassas City Council adopted significant changes to the City’s Zoning Ordinance. All new applications filed after May 12 must comply with the new ordinance requirements.

City staff wanted to make the Zoning Ordinance more business-friendly and less complicated while correcting technical issues and incorporating updates necessitated by changes in state and federal laws. Some of the new provisions include:

(1) Contains office space for diagnostic or outpatient care along with associated medical facilities such as a pharmacy, laboratory, physical therapy facility, or other similar facility, but does not provide inpatient hospitalization;
(2) Holds a Certificate of Public Need authorization from the Virginia Department of Health;
(3) Is licensed by or registered with the Virginia Department of Health and used principally for performing surgery;
(4) Is operated for the performance of surgical or other procedures where the patient is not capable of self-preservation during the procedure or recovery; or
(5) Is held out to the public as any of the above.

The City of Manassas Zoning Ordinance can be found here – http://www.manassascity.org/index.aspx?NID=747.  Please contact our Prince William Office land use team if you wish to discuss the Zoning Ordinance update.