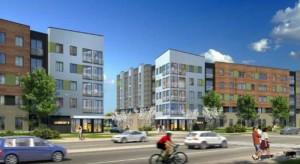 On May 17, the Arlington County Board approved nonprofit affordable housing developer AHC’s redevelopment proposal to replace the two existing residential buildings, which would otherwise require massive infrastructure and structural improvements, with two new buildings containing a total of 257 units.

Shareholders Evan Pritchard and Art Walsh worked closely with AHC and County Staff to develop a site plan amendment proposal that achieves many of the goals for the property set forth in the Four Mile Run Restoration Master Plan. Examples include orienting the new buildings toward the stream with ground-floor unit doorways, expanding the adjacent Four Mile Run Trail, and incorporating low-impact development techniques and native plants to greatly reduce the amount of runoff from the site into the nearby stream. The buildings will also adhere to the green building guidelines of the Four Mile Run Restoration Master Plan and the County’s green building policy by achieving EarthCraft Gold certification.

A major topic of discussion throughout the public process and at the County Board hearing was the new fence proposed to be installed between the project and the Four Mile Run Trail. The Four Mile Run Restoration Master Plan recommends that such fences be used sparingly and that other, more natural barriers be used where possible. Current Berkeley residents, with whom AHC will work closely during relocation to transition into new units, however, testified that the existing fence on the property provides a sense of security and safety that must be retained. After studying a number of design alternatives, the applicant team proposed a compromise solution with a fence that will undulate along the property line so that only portions will directly abut the trail. The remainder of the fence will be pulled away toward the residential buildings to create several areas along the trail that will be planted with trees and landscaping. AHC further agreed to remove the fence no later than 2036, provided that the surrounding area has had a chance to redevelop with new residential and commercial projects. This compromise approach was embraced by the County Board, which unanimously approved the project.