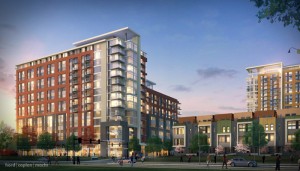 Well-known for her expertise on land-use matters, Cathy Puskar faced a rare public hearing double-header on February 20 when she appeared before two different Boards in two different jurisdictions. After winning approval for Village Center in the morning, Cathy raced over to the City of Alexandria to present the case for 2901 Eisenhower Avenue, securing a unanimous 7–0 vote later that day.

In 1998, VDOT acquired the vacant nine-acre property located on Eisenhower Avenue adjacent to the Washington Metropolitan Area Transit Authority switching facilities for use as a construction staging yard for the Woodrow Wilson Bridge project. The property remained off the City’s tax rolls for almost 17 years until Rushmark Properties purchased it from the Commonwealth. For almost 30 years, major development of the property has been envisioned in the City’s Master Plan, yet nothing materialized. This time, however, with Cathy’s assistance, the project will come to fruition and, when completed, will contribute to the City’s economic development efforts by providing much-needed tax revenue and additional housing in proximity to the highly anticipated relocation of the National Science Foundation’s new headquarters across from the Eisenhower Avenue Metro Station.

Development of 2901 Eisenhower Avenue includes two high-rise residential towers with 533 apartments, 67 townhouses, and 9,000 square feet of retail located on the ground floor of the southernmost residential tower. Other amenities include:

The project contains more than 1 million square feet and is one of the largest development projects approved in Alexandria in recent memory.