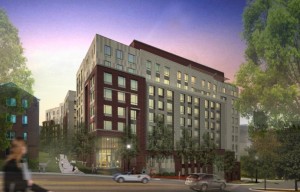 Walsh, Colucci, Lubeley & Walsh, P.C., is the region’s leading law firm for redevelopment along Columbia Pike, having successfully represented a number of clients in every 4.1.2 Special Exception Use Permit Commercial Centers Form Based Code approval to date and in two 4.1 Special Exception Site Plan approvals on the Pike that were informed by the requirements of the Form Based Code. Most recently, on February 24, 2015, Cathy Puskar achieved another notable milestone, securing approval of the first two development projects under the Columbia Pike Neighborhoods Form Based Code. The purpose of the Neighborhoods Code, adopted in November 2013, is to encourage redevelopment with an emphasis on preserving and creating affordable housing, providing quality housing for a diverse population at varying income levels, promoting sustainable and energy-efficient buildings, and promoting enhanced architecture, sidewalks, and open spaces. The two recent approvals, the George Washington Carver Homes project on the east end and the Columbia Hills project on the west end, have generated a total of 302 new housing units on Columbia Pike, including 235 committed Affordable Dwelling Units, thereby achieving the goals outlined in the Neighborhoods Plan.

The Carver Homes were built by the federal government in 1945 as temporary replacement housing for residents of Freedman’s Village displaced during the construction of the Pentagon and surrounding road network. The development was designed by noted African-American architect Albert Cassell. Many of the units are still owned by the original residents or their families. Because of the Carver Homes residents’ deep ties to the property and to Arlington County, Cathy and Matt worked closely with the residents, their neighbors, and County planning staff to develop a project that respects the history of Carver Homes and is compatible with the surrounding neighborhood. The redevelopment of Carver Homes will include construction of 50 townhouses and stacked townhouses containing a total of 73 residential units. Six of the units will be Affordable Dwelling Units. In addition, the development will feature amenities such as:

It is only fitting that the redevelopment of this significant property was the first to be approved under the Neighborhoods Code.

The Columbia Hills project, located on the site of the existing Columbia Grove apartment complex, will consist of construction of a new eight-story building with 229 apartment units and three levels of underground parking. The development will also include:

The development’s unique financing structure will allow all 229 units to be Affordable Dwelling Units, making the Columbia Hills development one of the Neighborhoods Code’s major success stories. The development will be owned and maintained by the Arlington Partnership for Affordable Housing, a non-profit organization with a long track record of success in creating much-needed affordable housing in Arlington County. Cathy and Matt assisted their client in navigating the complex public review and approval process that culminated in unanimous County Board approval following a four-hour public hearing featuring 43 public speakers with a variety of comments on the development.