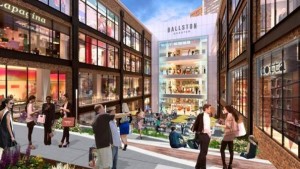 On November 21, a major redevelopment project for Ballston Common Mall was approved by the Arlington County Board. The project, known as Ballston Quarter, includes a public-private partnership with the County and approval of three site plan amendments. Two of the amendments were requested by Forest City for the construction of a new mixed-use residential building and redevelopment of the mall. The third amendment was requested by Buch Properties to upgrade the existing office building above Macy’s. Walsh Colucci Shareholders Art Walsh and Evan Pritchard represented the applicants throughout the planning and public process phases of the project.

A major component of the project will be construction of a 22-story LEED Silver Certified mixed-use residential building with two floors of retail and 406 residential units. The retail levels will be fully integrated with the adjacent mall, which will be completely transformed from an enclosed 1980s-era shopping center into an open and inviting destination full of new retail, dining, and entertainment options. Much of the existing roof will be removed to create an open-air “mews” through the building in addition to a plaza with amphitheater-style seating along Wilson Boulevard. 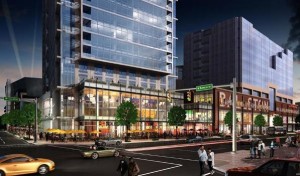 To further the transformation of Ballston Quarter into a more useable and inviting place, the project will incorporate multiple new vertical and horizontal connections to allow greatly improved access and interaction with the Kettler Iceplex, the County-owned public parking garage, and the surrounding community. The pedestrian bridge over Wilson Boulevard will also be redesigned and relocated to ensure continued connectivity with the nearby Ballston Metro Station. These public improvements, which will be critical to the project’s overall success, will be made possible through a public-private partnership between Forest City and Arlington County.

Complementing and strengthening the transformation of the mall will be the upgrade of the long-vacant office building above Macy’s. The office building will be dramatically updated to achieve LEED Silver and Energy Star certifications and will feature new entrance towers on both Wilson Boulevard and Glebe Road. The Macy’s façade will also be improved to match the color and style of the office levels above it. New streetscape and landscaping will be incorporated along all project frontages as part of the project. 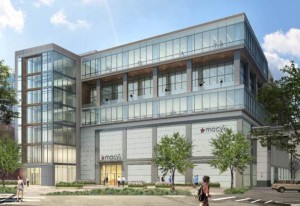