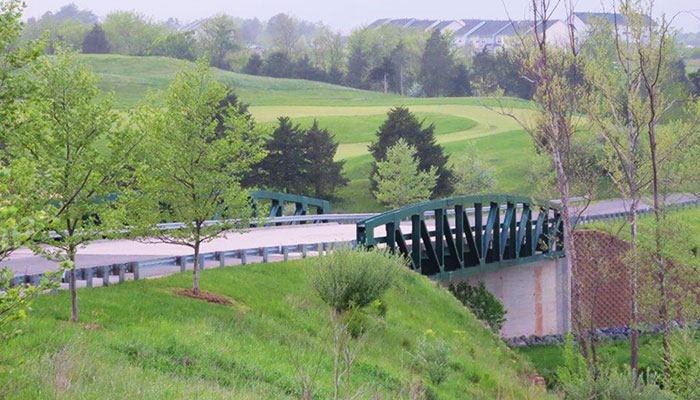 On January 17, John Foote and Marian Harders, with the able direction of D.R. Horton Project Manager Ines Vega, successfully shepherded a unique rezoning and subdivision variance application through the Board of Supervisors in Warren County. The case presented a complex range of land use and engineering issues that, after much time and effort, achieved unanimous approval by the Board.

Blue Ridge Shadows was originally zoned in 2002 for 225 homes, a golf course, and a commercial component. The entire development obtains access to U.S. Route 340/522 across a single bridge that was built at the outset of the development. Although the County’s subdivision ordinance requires three points of access to a subdivision the size of the approved project, one of those connections had been waived many years ago because of the physical conditions of the property. A second crossing of the run parallel to the highway was not only prohibitively expensive, but there was no available right-of-way. Therefore, a waiver was necessary for this second access point.

There was also a proffered limitation on construction of more than 150 homes until a new road connection was made to Route 340/522. When the Recession struck in 2005–06, however, the once unified project was broken up such that the golf course and commercial component were no longer under Horton’s control. It had become legally (and practically) impossible for Horton to make the road connection required, and so it faced a shutdown of the development even though the roads, sewer, and water lines had been installed for all 225 homes.

The resolution of these and other issues began fully three years ago, but consistently ran into hurdles including opposition from some of the existing residents of the development. Over time, Horton narrowed its focus and sought to rezone only a portion of Blue Ridge Shadows, identified as “Community 2” and comprising the area yet undeveloped. By so doing, the 150-unit cap remains applicable to “Community 1,” which includes almost all of the existing homes in the development, but that cap was lifted for the remaining lots in Community 2. Horton also agreed to designate 42 lots of Community 2 as age-restricted. Because of the impossibility of additional points of access to the development, the Board also waived the last required connection to the highway via a subdivision variance.