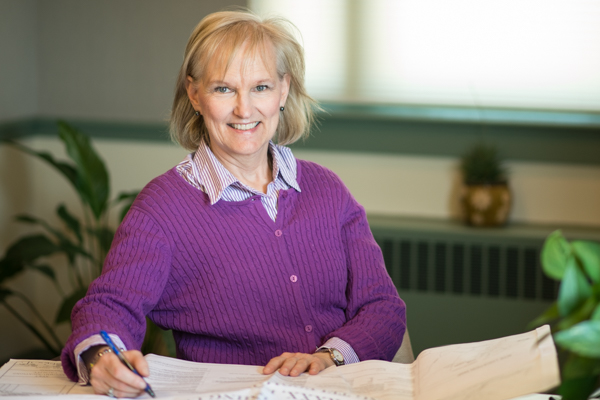 Although she was born in Richmond, Christine’s father’s job as an internal auditor for DuPont required the family to move around some. By the time she entered high school, her family was settled in Delaware. Christine attended college at the University of Delaware in Newark, where, during an urban studies course, the director of planning for the City was a guest speaker.

Christine was majoring in political science at the time, but after listening to Newark’s Director of Planning, she added a minor in urban studies to her curriculum. Her career in planning didn’t get off the ground right after graduation. She spent a year in Atlanta as an AmeriCorps VISTA volunteer—the domestic counterpart to the Peace Corps—then a year and a half with the Federal Aviation Association training to be an air traffic controller. Here’s how Christine explains it.

The Land Lawyers: What made you reconsider a career in planning?
Christine Gleckner: It was after I “washed out” of air traffic control training. I decided to enroll in graduate school at Virginia Tech to pursue urban planning and got my first job with the Loudoun County Planning Department. I worked there for 15 years in various positions before becoming a private sector planner. I landed at Walsh, Colucci, Lubeley & Walsh in 2002.

TLL: You’ve been with The Land Lawyers almost 15 years now. You’ve been quite involved and committed to Loudoun County since graduate school.
CG: I moved to Loudoun for the opportunity with the County and got involved almost immediately. I was Employee of the Year—for spearheading the automated land development application tracking system, which still is in use. I got involved with Leadership Loudoun because it was an opportunity to participate in a leadership development program, which likely led to my serving on the Waterford Foundation Board. I never left Loudoun County and live in the town of Purcellville.

TLL: Spending three and a half years in two diverse settings before deciding to return to graduate school must have reinforced it was the right career path for you. What do you enjoy most about your role as a planner?
CG: What has been enjoyable throughout my career as a planner is the challenge of finding the right balance between the urban areas of eastern Loudoun County and preserving the rural and scenic character of western Loudoun County.

TLL: Tell us about the projects you are working on now.
CG: I am close to finishing a rezoning for a mixed-use project in Leesburg’s Crescent Design District, and an infill residential project in downtown Leesburg’s Old and Historic District. Other than those two, I am working on a variety of Leesburg and Loudoun applications, having inherited Bill Keefe’s work in Lansdowne among other projects of his. (Author’s note: Bill Keefe retired from the firm in February after 15 years as a Land Use Planner in our Leesburg office.)

TLL: You have a history of community involvement. Tell us about the Waterford Foundation and the Loudoun Museum. You were a former board member for both.
CG: I am now completing another three-year term on the Waterford Foundation board of directors. The mission of the foundation is to preserve the Waterford National Historic Landmark, which received the highest designation the federal government confers—on par with Mount Vernon and Monticello—for the well-preserved historic village plus its surrounding rural landscape. I have been able to contribute to this mission using my background in planning.

TLL: What do you like to do in your spare time, Christine?
CG: I prefer talking about my family rather than about myself! I live with my partner, previously a sound engineer on Broadway, who gladly left New York City to live in Virginia. He is a lifelong avid Civil War buff and has been able to pursue his passion for American history as a licensed tour guide in the District and as a tour narrator at Arlington National Cemetery and, of course, at Civil War sites.

My son and his wife live in Blacksburg, where he works at Rackspace, a cloud computing support company, but don’t ask me what he does because I don’t understand it. Even though he lives in Blacksburg, he isn’t a graduate of Tech but a proud graduate of the University of Mary Washington.

My daughter and her husband live in Baltimore and, like me, are Fightin’ Blue Hens. They graduated from the University of Delaware with degrees in civil engineering. She is a transportation engineer for Sabra Wang in Columbia, Maryland. Our fields overlap and we can talk shop with one another—unlike my son and me.

TLL: What part of the world, or universe, would you most like to visit?
CG: I would be interested in doing far more travel than my time and budget permit; however, I am trying to visit the major national parks in the United States and Canada. Not related to that goal, I am taking a trip to the Netherlands and Belgium in April.

TLL: Why do you think Walsh, Colucci, Lubeley & Walsh is a great place to work?
CG: Great people to work with who work as a team—not in competition—on a variety of interesting and professionally challenging projects. The clients have been great to work with as well.