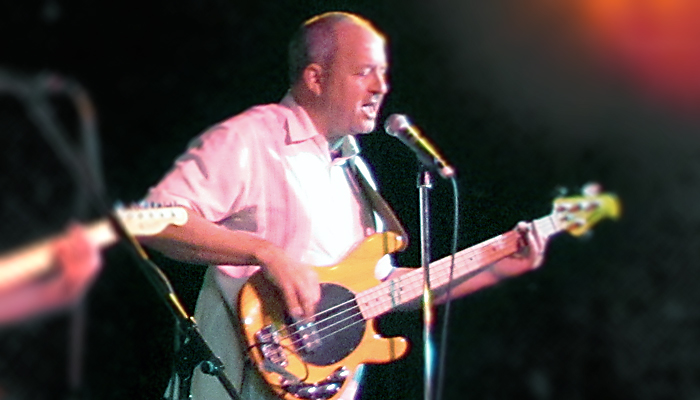 Back in the 1970’s, growing up in a wooded neighborhood in Tysons Corner, John never imagined he would become an attorney. He imagined himself as a musician, but John’s father, who worked in the construction and development business, told him he needed to make an honest living. Hoping to buy time before committing to a career, law school seemed like a good option. Without having to sacrifice his music, John’s decision paid off.

One might assume that having a father (and a grandfather) in the construction and development business, John would have jammed to the beat of their drums. And, as a Land Lawyer, you might say that he has, except John is no ordinary Land Lawyer. John Rinaldi is a litigator who focuses on real estate title issues, construction and development, and larger business issues such as assisting foreclosure purchasers and lenders in the process of foreclosing. John’s article in this month’s Land Sense is about lender foreclosures, but we’re here to talk to him about his practice and his music.

The Land Lawyers: What types of cases do you focus on?

John Rinaldi: Litigation involving real estate title issues – and there can be a lot of them, title insurance, mechanic’s liens, and other business-related real estate issues. I also work on zoning issues and recently won a case concerning a subdivision by-right. You can read about that here.

TLL: This month, you wrote an article on homeowner’s challenging foreclosure. Have you seen a decline in foreclosures since the housing bubble burst in 2007?

JR:  There was a huge increase in the number of foreclosures after 2007 that has only recently, over the past few years, appeared to be subsiding.

TLL: Who is, and is not your typical client in a foreclosure case?

TLL: When does a lender or foreclosure purchaser typically involve you in the process?

JR:  Every case is different depending on the parties and properties involved.  We have had a lot of cases recently in which the local counties have tried to limit the ability of lenders to foreclose on properties identified as Affordable Dwelling Units.  We also often see cases in which there are errors in the deed of trust.  Also, we see quite a few foreclosed owners that want to challenge the validity of the foreclosure.

TLL: Your clients think of you as a rock star litigator but do they know that you really are a rock star? Tell us about your band, Larry & The Land Lawyers, and when you first got interested in music.

JR: I got interested in the trumpet in fourth grade, but wanted to learn a second instrument when I got into high school.  There were tons of guitar players in my school but there weren’t as many bass players, so I picked up the bass guitar and improved my odds of getting into a band by simple supply and demand. Besides, I am not nearly coordinated enough to play guitar.

I played in a few bands in college and law school and met a drummer, Larry Clark, through mutual friends.  In 1993, I joined the firm and met Mark Goetzman, a Land Lawyer who also plays guitar and sings.  Years later, Larry introduced me to guitarist Mike Kieffer before he went to law school and before he became a Land Lawyer. The three of us played together a few times a year with other friends just for fun. It’s actually Larry’s fault that Kieffer ended up working for the firm—I mean that in a good way!—and without Larry there would be no Larry & The Land Lawyers.

TLL: How did you become rock stars?

JR: One of our many gigs included playing the Walsh Colucci holiday party and other firm events. A few years ago, Mike found out about a battle-of-the-law-firm-bands fundraiser to benefit Gifts for the Homeless and we participated in the fundraiser every year since. This past year, because of a scheduling conflict, we were given the opportunity to participate in the 2nd Annual Law Rocks fundraiser at the 9:30 Club. We played on the same stage as the Ramones, Psychedelic Furs, R.E.M, Cyndi Lauper, Marshall Crenshaw, Root Boy Slim, and the list goes on. We played for HomeAid Northern Virginia and the event set a one-night record, raising more than $115,000 for charity.

It was a great night. You can read about it here, and here, and watch our performance here.

TLL: Aside from preparing briefs and jamming with The Land Lawyers, what else do you like to do in your spare time?

TLL: Do you have a hero or heroine?

JR:  My father and both of my grandfathers.

TLL: Why do you think Walsh, Colucci, Lubeley & Walsh is a great place to work?

JR: The collegial atmosphere, everyone here is great to work with.

TLL: One final question. Do you still play the trumpet?

JR: No, but I can play the ukulele.