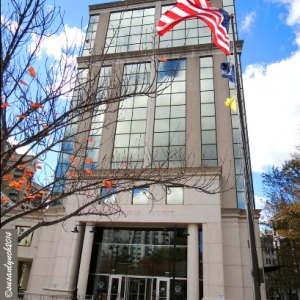 Arlington County is currently in the process of developing a concept plan for a new civic center at Courthouse Square. This planning effort, known as “Envision Courthouse Square,” aims to update and improve the 1993 Courthouse Sector Plan Addendum to address public open space and cultural resources and to identify a potential location for a 300,000+-square-foot County office building and a cultural facility.

Other objectives include determining appropriate uses and sizes for surrounding public and private buildings, improving circulation networks in the area, and developing recommendations for the long-term sustainability of Courthouse Square. The ultimate goal of this planning process is to integrate a network of buildings and outdoor areas to create a lively, pedestrian-friendly, mixed-use square that will serve as the civic heart of Arlington County.

Throughout the concept planning process, County Staff has solicited input from the Courthouse Square Working Group (a team of investors, sponsors, and community representatives chosen by the County Board), various County Commissions, neighborhood and civic groups, and interested members of the public. In September 2014, based on feedback received from these various stakeholders, County Staff released three design concepts.

Through an ongoing civic engagement process, County Staff gradually refined its recommendations for the new Courthouse Square. In mid-October 2014, Staff released a single concept design that incorporates the most desirable elements of the original three designs. The primary attribute of the current concept plan design is the replacement of the existing Courthouse parking lot with a public park. The plan also features several new public and private buildings framing the square, increased ground-floor retail opportunities, a pedestrian promenade, improved and relocated Metro entrances, pedestrian and transit circulation upgrades, and a potential civic/cultural programmable space at the south end of the square. On October 29, 2014, the Working Group met with Staff to offer feedback on preliminary recommendations relating to circulation and parking, open space, building size and use, cultural resources, and sustainability.

The Working Group will conclude its review of the Staff recommendations at its next meeting (scheduled for November 19). Staff has tentatively scheduled a work session with the County Board for early December 2014. At this meeting, Staff will present the concept plan design and associated recommendations and solicit guidance from the County Board on several key issues. Using the input received at this work session, Staff will then initiate the Sector Plan update process, which will run through late spring of 2015 and include further opportunities for public input.