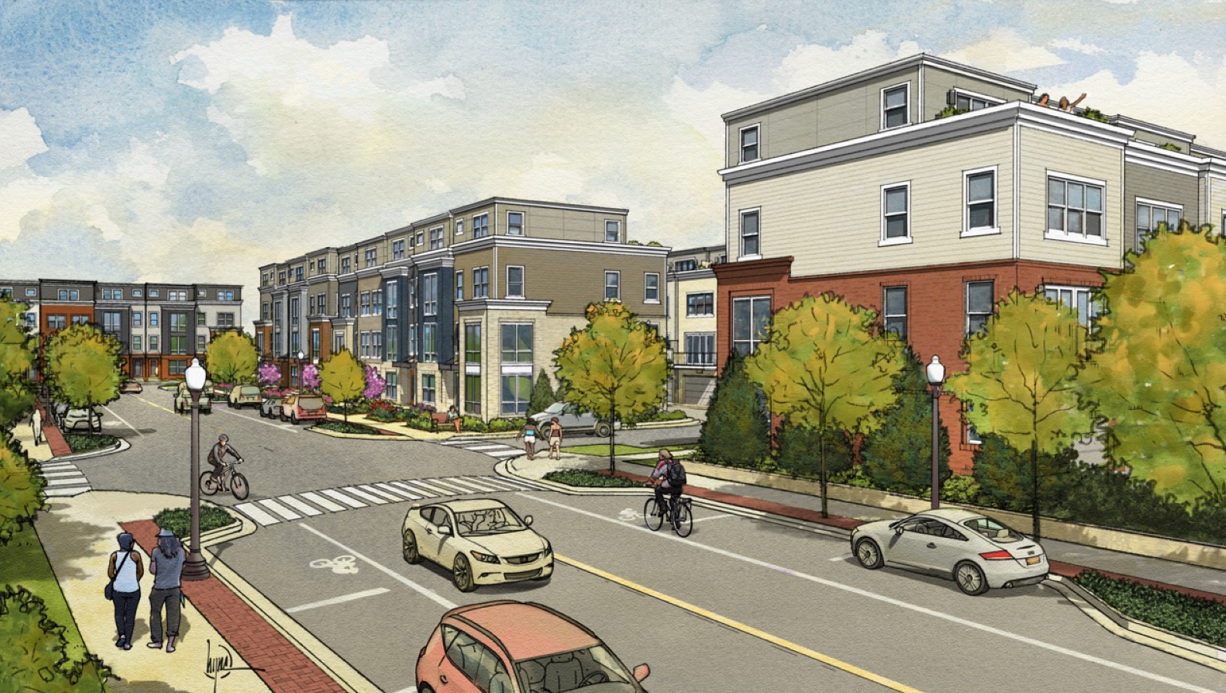 On July 14, 2020, the Fairfax City Council unanimously approved a rezoning application submitted by Northfax JV LLC, an affiliate of The Lann Companies, to allow the development of fifty-six (56) townhouses and a 200-unit senior living building.  The plan also includes a future development phase where the uses are not yet determined.  Comprised of approximately 11.46 acres on an assemblage of 17 parcels, the property is located within an area known as Northfax West.  The proposal represents a collaborative effort with the Brown’s Mazda dealership to the south and the City of Fairfax to make significant, coordinated improvements to Northfax West.  Specifically, the approval permits an extension of Farr Avenue that will connect Fairfax Boulevard and Chain Bridge Road to establish an important link of the Northfax street grid.  The proposal is consistent with the “Activity Center” designation of the City’s 2035 Comprehensive Plan, as well as the recently adopted Northfax Small Area Plan.  The approved development plan represents a significant step to advance the City’s vision to make Northfax into a regional mixed-use destination that will strengthen economic vitality, provide diverse residential, commercial, and retail opportunities, and reinforce the City’s regional appeal.

Land Use Attorneys Lynne J. Strobel and Kathryn R. Taylor worked diligently with the development team, City staff, City Planning Commissioners, City Council members, and the community to obtain approval of a Rezoning, Special Use Permit, Special Exception and Certificate of Appropriateness.  The approvals allow a phased development.  The first phase includes the construction of infrastructure, including road and trail improvements. Madison Homes, Inc. will construct 56 garage townhomes as a second phase of development. The townhouse community will include a pocket park, a tot lot, and other residential amenities. Consistent with the recently adopted Northfax Small Area Plan, the development incorporates a linear park to promote connectivity. An eight-foot trail begins on the western property line at the intersection of Perry Street and Howerton Avenue, and extends through the community and the future development parcel to Chain Bridge Road.

Concurrent with the townhouse construction, Brightview Senior Living plans to commence development of the City’s first senior living community. A seven-story building with structured parking will be a residence to seniors, and include assisted living and memory care units. In addition to typical indoor amenities, such as fitness rooms, a hair salon, and a movie theater, the community will include two outdoor courtyards. These landscaped courtyards will be open to the adjacent townhouse community and provide an opportunity for intergenerational engagement. A series of seating areas, a fire pit, gardens, and other features will create a welcoming and useable environment.

Finally, the fourth phase envisions the development of approximately 3.5 acres characterized as a Future Development Parcel. This acreage will be the subject of an application separately evaluated and presented to City Council at a later date. This parcel, with its frontage on Chain Bridge Road, will likely be developed with more intensive uses that may include a hotel, multifamily residential, and retail.

One of the more significant challenges during the rezoning process was community opposition to the removal of existing trees on the property and the placement of a portion of an existing stream in a pipe.  The commitments associated with the development include a thoughtfully balanced series of actions that will mitigate any environmental impacts.  A robust landscape plan, including the removal of invasive species, will enhance the community and ensure a forested condition on a portion of the property.  The implementation of the desired street grid and development consistent with Comprehensive Plan recommendations necessitated a relocation of the stream, which was in poor condition.  The property owner and developers completed a multi-layered process for the stream relocation with the Department of Environmental Quality, FEMA, and the Army Corps of Engineers.  In addition to a required monetary contribution for stream credits, the developer agreed to restore 2,190 linear feet of a publicly accessible stream within Van Dyck Park at no cost to the City.  The stream restoration project was coordinated with the City of Fairfax and will improve the health of Accotink Creek to the benefit of City residents.

Walsh Colucci was pleased to work on such a significant project that allows for development of a regional mixed-use destination that aligns with and advances the goals of the City’s vision in the Northfax Activity Center.