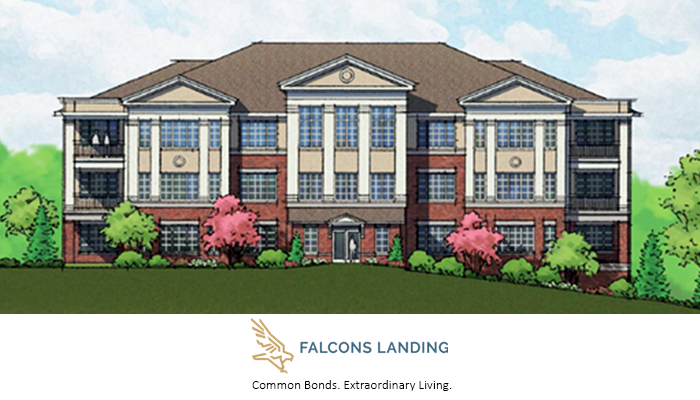 Falcons Landing is operated by the Air Force Retired Officers Community, a non-profit organization dedicated to providing quality housing designed to promote health, security, happiness, and usefulness in longer living. The AFROC Board pursued redevelopment after concluding that the existing housing stock and health care amenities were insufficient to meet future demand. Falcons Landing opened in 1996. Over the past 20 years, significant changes have occurred in the life care marketplace that require action by all existing life care communities to remain relevant and competitive. For example, new life care communities feature open floor plans, higher ceilings, and more open space for residents to enjoy. The challenge for the AFROC Board was to find the delicate balance of preserving the beauty of Falcons Landing while accommodating the community’s future needs. This goal was achieved through the recently approved application.

The redevelopment proposal required approval of a zoning concept plan amendment and special exception application that would amend the original zoning concept plan amendment approved in 1993. Walsh Colucci provided the land use expertise and support that helped Falcons Landing achieve its goal. This effort required numerous community outreach meetings, both within and outside of Falcons Landing, and creation and evaluation of the necessary application approval documents.

The residents of Falcons Landing embody the determination, sacrifice, and honor that defines their community. It would be difficult to find a more genuine and decent group of people in this country. While the process was not easy, the AFROC Board and Falcons Landing residents stood resolute behind their plan and were able to achieve success in their efforts to sustain Falcons Landing for decades into the future.