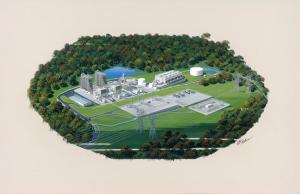 Our client, Green Energy Partners, sought to obtain approval to construct a hybrid gas turbine/reuse water and photovoltaic solar array power plant in Loudoun County. The hybrid facility was proposed as an environmentally friendly, combined-cycle natural gas and water power plant that would provide a clean energy source and fulfill the region’s needs for new energy. More specifically, the proposal was for a (nominal) 778-megawatt facility, including a 589-megawatt combined-cycle gas turbine plant, with two 197-megawatt, simple-cycle peaking gas turbines.

Steps Taken to Achieve the Goal

Rezoning and Special Exception approvals were necessary prior to construction. In order to achieve approvals, multiple high-level meetings with elected and appointed officials, as well as significant community outreach, was required.

The power plant, which will be one of the cleanest facilities of its kind in the United States, was approved unanimously and will allow Loudoun County to use power generated within its borders for the first time since the County’s inception in 1757. The approved facility will use up to 4.5 million gallons per day of wastewater effluent for cooling water, eliminating 2 billion gallons of effluent per year from being discharged into the Potomac River and Chesapeake Bay. The hybrid power plant will be one of the largest infrastructure projects in Virginia, and will serve as a stimulus for the local economy, creating 1,205 jobs and $183 million per year in revenues during three years of construction. Once operational, it is estimated that the facility will generate between $8 million and $412 million per year in Loudoun County real estate and personal property tax.

Bechtel and Siemans Energy, Inc., are building the plant for Panda Power Funds.  Construction began in July 2014 and recently all of the offsite reuse waterline easements were obtained, which included 13 different properties. Reuse water will be supplied from the Town of Leesburg wastewater treatment plant. Panda Power Funds has raised $571 million for the Hybrid Energy Park facility and construction is anticipated to be completed in the spring of 2017.