On October 27, Virginia’s Commonwealth Transportation Board (CTB) voted to approve a preferred alternative for improvements to I-66 from the Beltway to Haymarket. Dubbed the I-66 Outside the Beltway Project, the proposal calls for two high occupancy toll (HOT) lanes alongside three regular lanes in each direction, and a wide median to accommodate future transit options.

The Virginia Department of Transportation and the McAuliffe Administration have also made public the most recent evolution of the plans to transform I-66 inside the Beltway. The current proposal adds tolling to I-66 from the District line to the Beltway in rush hour directions, with cars carrying two or more passengers exempt from the toll. If approved, these plans will add I-66 to the existing tolling infrastructure within Northern Virginia, increasing driving costs for some, while adding capacity to I-66 and a stream of funding for future improvements.

If a picture is worth a thousand words, the graphic below, depicting the proposed cross-section for I-66 from the Beltway to Gainesville, speaks volumes in terms of future transit. 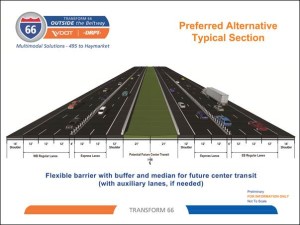 Three general purpose lanes will run alongside two HOT lanes in each direction, with a median for future transit (possibly the extension of Metro service). At University Boulevard in Gainesville, the HOT lanes, which may become part of the Express Lanes system, will transition to non-tolled HOV lanes to Haymarket, where the Outside the Beltway Project ends. The preferred alternative for the Outside the Beltway Project also includes adding or expanding park-and-ride facilities in these locations:

The project will cost an estimated $2.1 billion. The next major milestone comes in December when the CTB likely will select a funding option. Various types of public-private partnership arrangements are under consideration. Some components of the original concept—extending HOT lanes from Gainesville to Haymarket and rebuilding the Monument Drive and Stringfellow Road interchanges—are being deferred. It is anticipated that a contractor will be selected in the fall of 2016 and a design public hearing will take place in early 2017 with construction starting that year as well. The new lanes are projected to be open to traffic in 2021. Although VDOT and its design team have undertaken efforts to reduce right-of-way effects, some additional right-of-way presumably will be needed to accommodate infrastructure such as new ramps and park-and-ride lots. More information on the Outside the Beltway Project, including detailed maps depicting the proposed improvements, can be found here.

Inside the Beltway, I-66 is currently limited to use by HOV-2 vehicles during peak hours—from 6:30am to 9:00am for eastbound lanes, and from 4:00pm to 6:30pm westbound. Based on information gathered at a series of meetings and other sources, the current plan for I-66 inside the Beltway is to add dynamic tolling only for single occupancy vehicles traveling with rush hour traffic during peak hours (eastbound in the morning and westbound in the afternoon). Vehicles equipped with the proper E-ZPass and with two or more occupants, as well as drivers traveling a reverse commute, would pay no tolls. VDOT has also proposed extending peak traffic hours to 5:30am to 9:30am and 3:00pm to 7:00pm.

The current plan is a toned-down version of the original proposal, which included increasing the vehicle occupancy requirement to three or more passengers to avoid paying a toll and making single occupancy vehicles pay a toll at all times, with the cost increasing or decreasing depending on the level of congestion. The plan all along has been to use tolls collected as a source of funds to add additional lanes or construct other improvements to I-66 from the District line to the Beltway.

One potential consequence is that the addition of tolls will push single occupancy vehicles onto parallel roads, which, VDOT has stated, are currently capable of accommodating increased traffic.  Some of the toll money may also be used to improve the parallel roads as needed. Furthermore, if significant improvement in traffic congestion is not evident five years after implementation of the proposed plan, VDOT has stated it will pursue the widening of I-66 inside the Beltway.

There has been considerable public and political opposition to the addition of tolls on I-66 inside the Beltway. It is possible that the recent changes to the proposal have made the project more effective and that it will continue as currently proposed, with tolling to begin sometime in 2016. For more information about the transformation of I-66 inside the Beltway, visit inside.transform66.org.