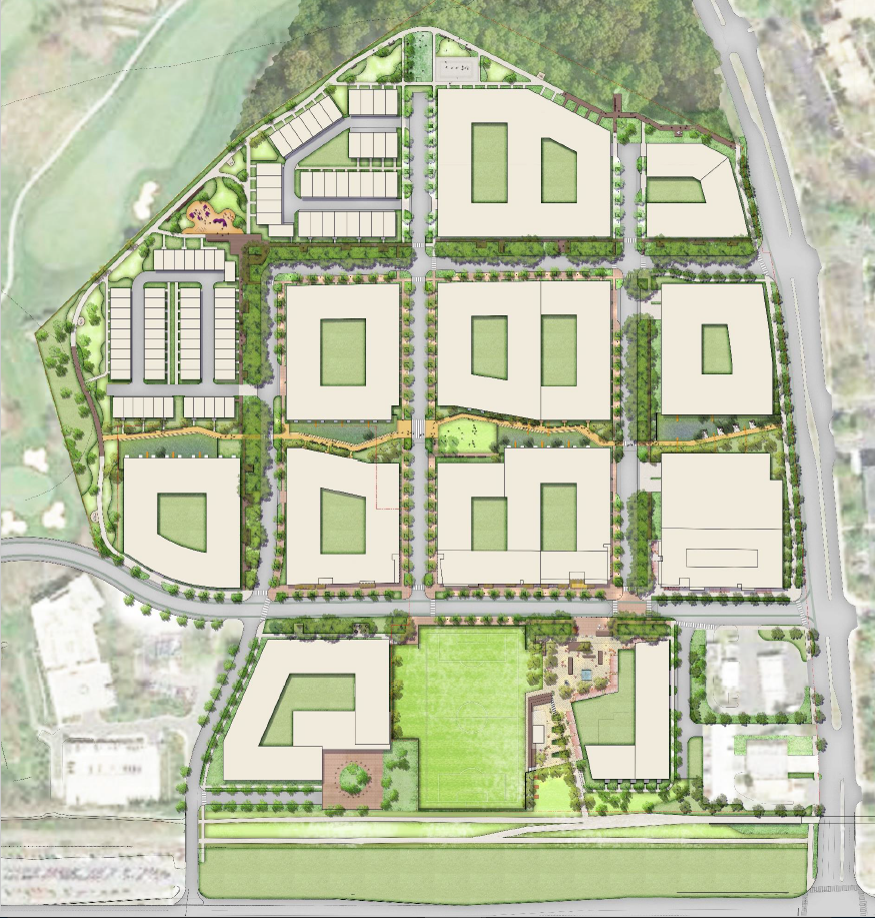 Creating a dynamic new mixed-use neighborhood goes to the heart of quality land use planning and creating great communities.

On October 15, 2019, the Fairfax County Board of Supervisors approved the redevelopment of a 32-acre portion of Reston’s Isaac Newton Square. The complex, which is bounded on the south by the Washington & Old Dominion Trail, to the west by Hidden Creek Country Club, and to the east by Wiehle Avenue, was one of Reston’s first major office/industrial developments.

Isaac Newton Square today features several older buildings surrounding a substantial asphalt parking lot ringed with mature willow oak trees. With the arrival of Phase I of the Silver Line and the Wiehle Avenue Metrorail station, the site was included as part of the 2014 Reston Comprehensive Plan Amendment and targeted for substantial redevelopment.

Over the past three years, the park’s owner, Peter Lawrence Companies, alongside their development advisor, MRP Realty, began envisioning a new future for the site. They engaged a design team which included OCULUS Planning and Urban Ltd., and solicited input from citizen groups, Restonians, and Fairfax County staff.

Based upon substantial feedback, the project team set forth a series of design drivers to guide the redevelopment approach. These included fashioning a layout centered around open space corridors and the comprehensive plan’s grid network. There was also a recognition that the “front door” of the project should be focused on the W&OD Trail. The team also considered Reston’s seven “Founding Principles,” created by the late visionary, Robert E. Simon, which embraced concepts such as multi-generational livable communities and the creation of dynamic public realms.

A key focus of the proposal was to create meaningful open spaces and provide a framework around the preservation of the site’s mature willow oak trees. The open space plan also provides opportunities for each block to have direct access to nature on what is today, a paved site. An intentional focus was placed on the quality of each open space and the types of activities that are likely to take place within the spaces. They also negotiated with NOVA Parks, the Fairfax County Department of Transportation, and the Fairfax County Park Authority on issues related to pedestrian access to the W&OD Trail, water lines, and design of parks.

The team worked extensively with County staff to develop a variety of streetscape activation, placemaking elements, building architectural requirements, and landscaping enhancements to guide the ways in which individual buildings and blocks may take shape.

The final design includes substantial landscaping and open space which exceeds county requirements. It is anticipated that improvements to the site will mitigate stormwater runoff, enhance the site’s habitat and aesthetic opportunities, and ultimately aid in the reduction of the existing urban “heat island” effect. A unique central east-west environmental “pedestrian livability” spine, known as the “Rain Garden Meander,” will integrate the project’s stormwater management into its open space system and include hardscape pathways, flexible lawn spaces, landscaping with native plants for habitat, shade structures, and seating areas.

A critical element of the neighborhood is the provision of a full-size athletic field at the southern end of the project adjacent to the W&OD Trail. The field will be adjacent to an urban plaza and warm-up field that will be multimodal acceible, help drive local commerce to the project’s retail uses, and transform Isaac Newton Square into a signature location for users of the trail.

The result of the team’s efforts is the creation of reason’s next great neighborhood that complies with all of the planning principles set forth in the comprehensive plan in terms of land use and density, placemaking, open space, and mobility. Andrew Painter led Peter Lawrence Companies and MRP Realty through the approval process. 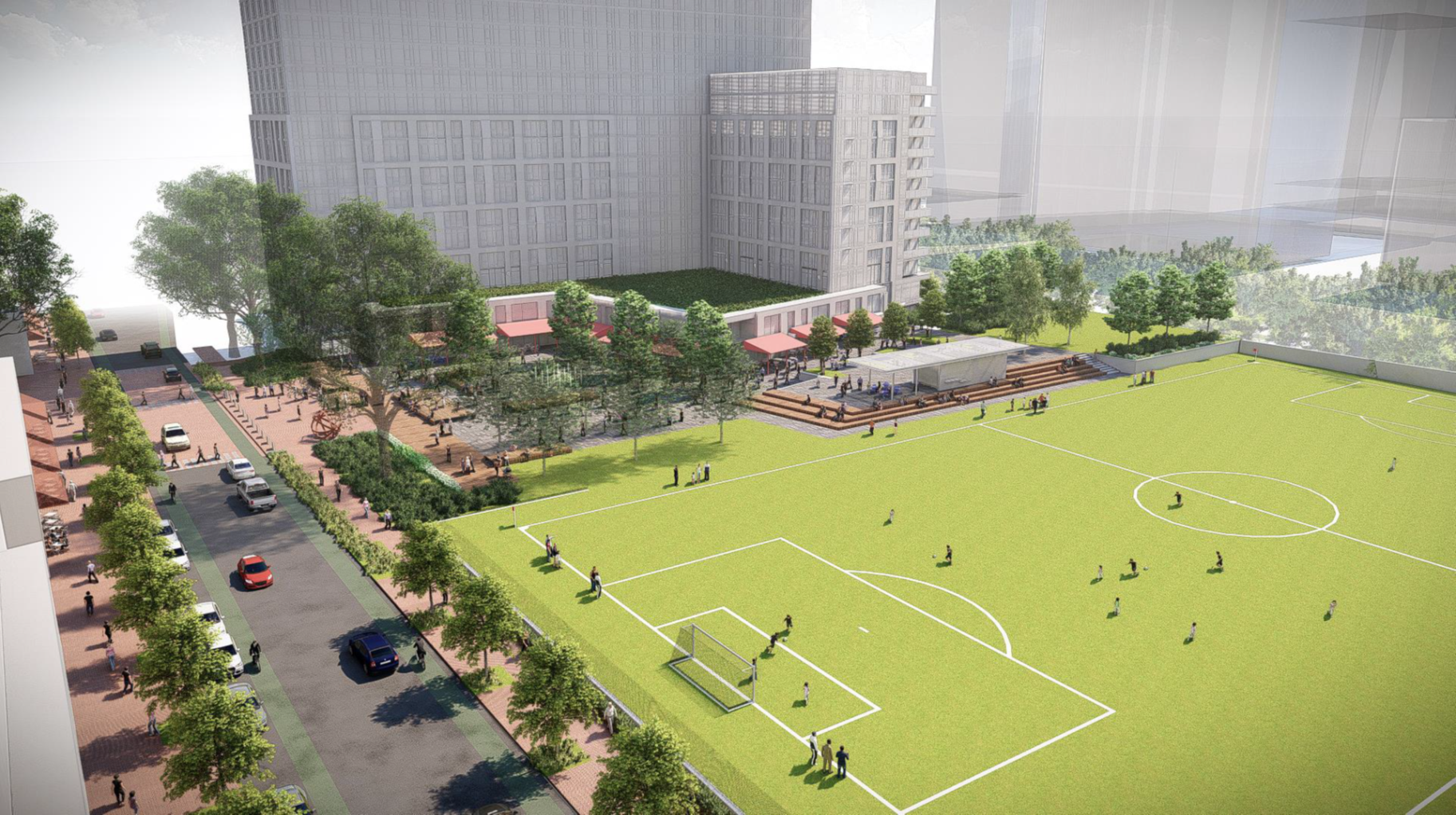 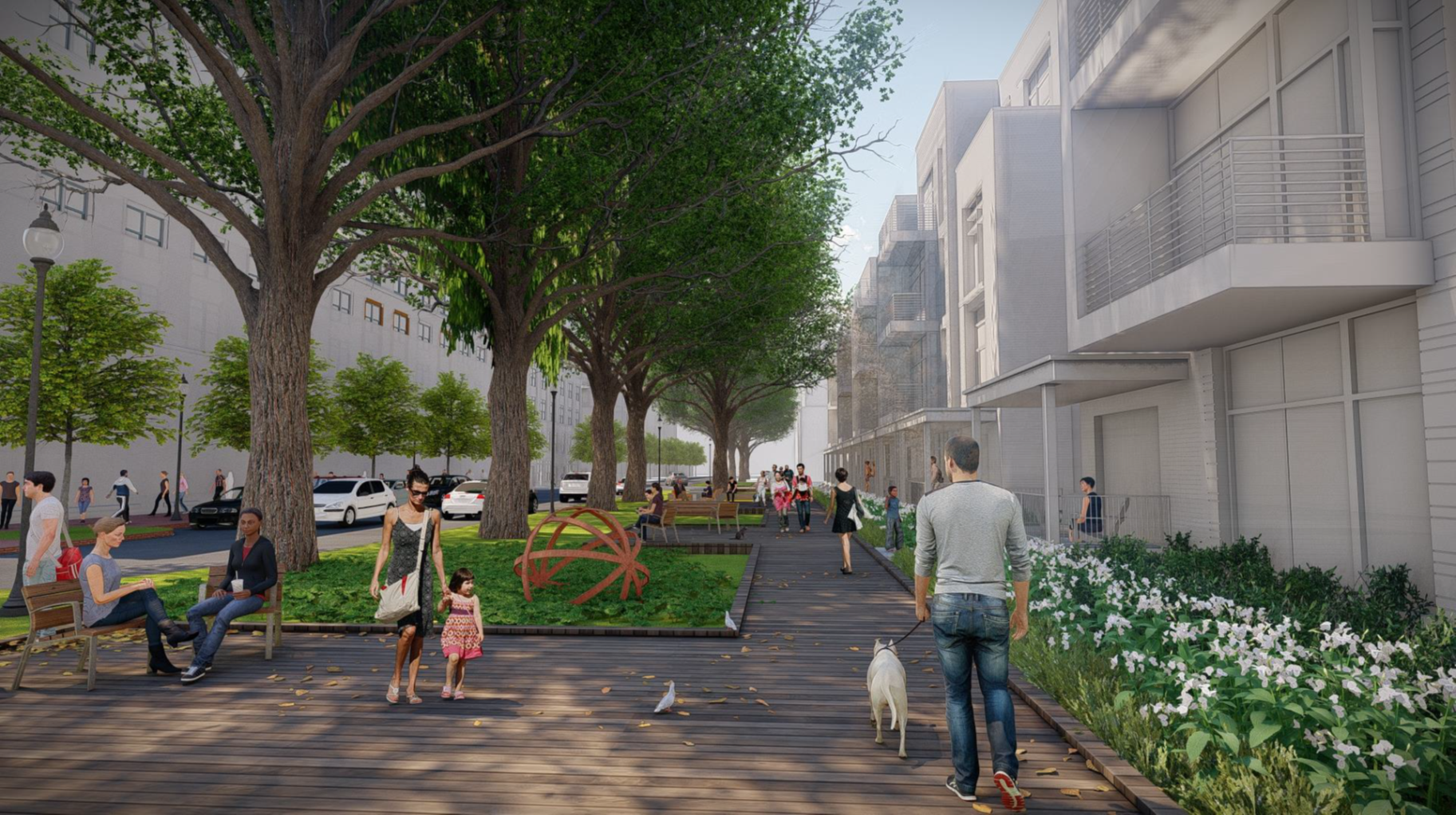 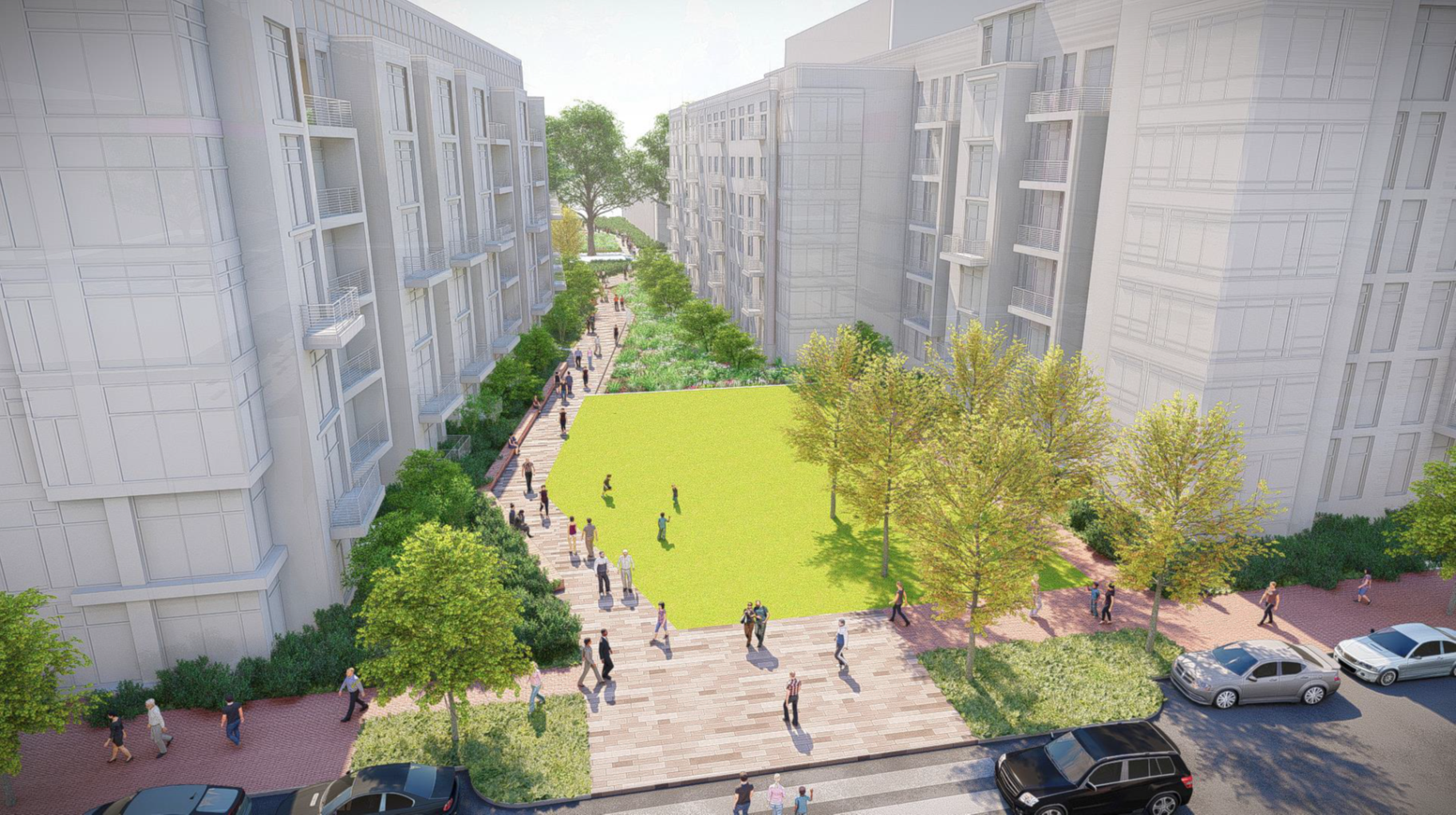 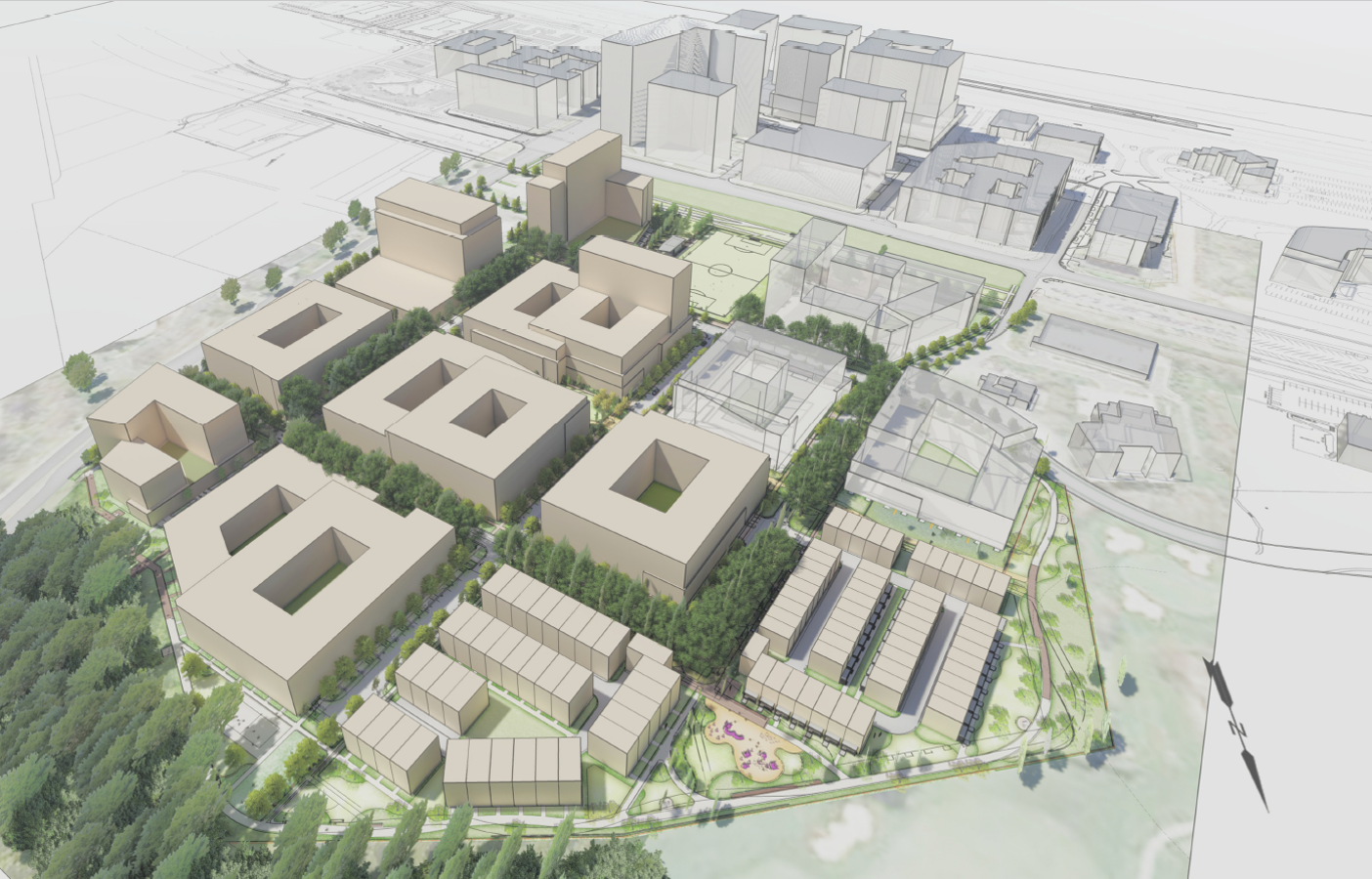