At the November 16, 2013 Arlington County Board Hearing, Board Member, Libby Garvey, stated that [She] ” …felt it was one of the best changes we could make for the community and although she hears the importance of the Sector Plan, she supports the motion.” She was affirming her position on voting in favor of the Penrose Group’s rezoning and site plan for the block bounded by Fairfax Drive, North Monroe Street, 10th Street North and North Nelson Street in Virginia Square. The County Board approved this site plan, 3 votes to 2, for a twelve-story, 265 unit residential building with ground floor retail, a cultural space, two connected public plazas and 262 below-grade parking spaces. The building will be LEED Gold and LEED EBOM certified and includes a kinetic art sculpture in the Fairfax Drive plaza. The site plan received bonus density for the LEED certifications as well as for the provision of affordable housing in the form on 14 on-site units, 11 of which are two bedroom units. 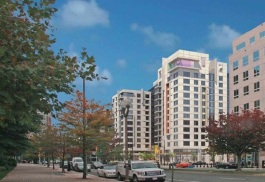 Nan Walsh, assisted by Megan Rappolt and Elizabeth Nicholson, partner and land use planners respectively with Walsh, Colucci, Lubeley & Walsh, P.C. worked through the County Site Plan process with Tysons-based developer, Penrose Group. The project, called “The Latitude” was deferred at its July 2013 Planning Commission hearing due to a concern about the residential use not being compliant with the guidance in the 2002 Virginia Square Sector Plan. At the July Planning Commission hearing, the County Manager recommended an Ad-Hoc Committee comprised of Planning Commissioners and citizens who opposed the project to review the Sector Plan text specific to this project. The Ad-Hoc Committee resulted in no consensus and a four month deferral of the case. On November 6, 2013 The Latitude returned for a second full public hearing before the Planning Commission and left with another recommendation for deferral.

Given that the case would rise and fall on a policy question, the outcome of the case was uncertain, until the County Board took their final vote. During her County Board presentation, Nan Walsh said that the plan addressed 95 Virginia Square Sector Plan goals. In making her case for the residential project, she continued “The plan before you not only checks the Sector Plan boxes, but checks them more boldly than its office counterpart could.” In addition, Walsh stated, ” By way of example, I would submit to you that our site plan today provides more open space, more interesting architecture and tapering, greater building setbacks from our neighbors, better/more inviting pedestrian connectivity around and through the site, 630 less daily automobile trips, and a variety of housing types and affordability than its office counterpart would provide.”

After 34 public speakers, evenly split on the case, and nearly five hours of public hearing, Board Members Fisette, Tejada and Garvey voted to approve the project. Tejada indicated that his vote had come down to the applicant’s provision of on-site affordable housing in such close proximity to the Virginia Square Metro station. Board Member Fisette stated that this is not to be a precedent in regard to the Sector Plan, but that he thinks this will be a positive addition to community. He said that he likes the open space, energy efficiency, affordable housing, and cultural amenity provided with the project.