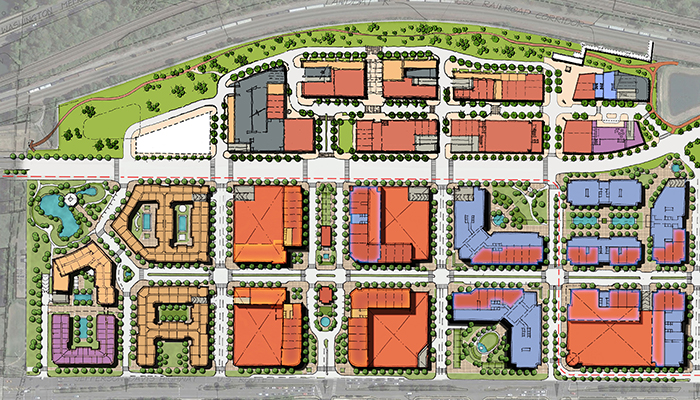 Source: The JBG Companies and Streetsense

Fast-forward to 2017 and the City of Alexandria has overcome a majority of the hurdles associated with realization of the Metrorail project: it has obtained the required local and federal approvals, developed the necessary funding mechanisms, and determined the location of the station and its entrances. At the same time, Walsh Colucci’s Cathy Puskar, representing The JBG Companies, has worked with City Staff and the Alexandria community to update the 2010 Plan to accommodate the new northern Metrorail Station entrance as well as JBG’s proposal for the first phase of redevelopment of North Potomac Yard. This coordinated effort was motivated by advantageous timing for both JBG and the City as the expiration of the Regal Potomac Yard Theater lease coincides with the commencement of construction of the Metrorail Station. JBG intends to capitalize on this opportunity by creating a 1.3-million-square-foot, mixed-use urban community including a concentration of retail, as well as residential, office, and hotel uses, to establish a 24/7 transit-oriented development on the theater site at the new Metrorail Station’s front door.

While the fundamental principles of the 2010 Plan remain unchanged in the 2017 Plan, the updates include several improvements to both urban design and community benefits. The 2017 Plan proposes increased open space, including a new neighborhood-serving open space/park, a new plaza that integrates the northern entrance to the Metrorail Station and the mixed-use development, and expansion of the regional Potomac Yard Park. Additionally, the 2017 Plan emphasizes the prioritization of pedestrians, bicycles, and transit over single-occupancy vehicles through urban design, including retention of the existing configuration of Potomac Avenue, allowing the City future flexibility to design an alternative ultimate cross section with future phases. The 2017 Plan has also been revised to reflect the City’s commitment to creation of housing for all income levels by allowing the possibility of bonus density for the provision of affordable housing.

The Planning Commission and City Council will consider the proposed 2017 Plan at their June public hearings. Following the 2017 Plan approval, Cathy Puskar and JBG will work with staff to update the Coordinated Development District zoning and process the Development Special Use Permit applications for the Phase I development. Approval of the 2017 Plan will represent a major step toward realization of the City’s vision for a transportation-oriented, sustainable mixed-use urban development in Potomac Yard.