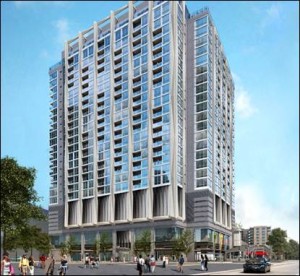 On September 21, 2015, the Arlington County Board approved site plan amendments to the 17-acre Pentagon Centre site in Crystal City. These amendments will allow construction to move forward on the first of three phases in what will likely be a 40-year project.

Phase 1 will include two LEED Silver high-rise residential buildings with a total of 693 units and ground floor retail at the Pentagon City Metro station. On-site affordable dwelling units will be provided in addition to a financial contribution to the County’s Affordable Housing Investment Fund. To ensure the continued success of the existing Costco and Pentagon Centre shopping center, an above-grade garage will be constructed to replace the existing surface parking that will be lost. The garage will include ground-floor retail as well as a “hanging garden” façade equipped with an irrigation system powered by rooftop solar panels. A small public park will be constructed adjacent to the garage to provide some much-needed open space for the site.

The County Board unanimously approved the Phased Development Site Plan and Phase 1 final site plan amendments. Phases 2 and 3 of the project will replace the existing retail and Costco with new office, retail, and hotel buildings in addition to more public park space and a new grid of streets. At full buildout, the development will include more than 1.9 million square feet of gross floor area and more than three acres of public park space.