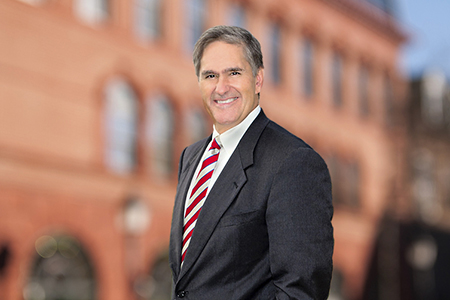 Randy, the managing shareholder of the firm’s Loudoun office, has been with the firm since 1998. He has successfully represented a number of clients in obtaining the necessary approvals for a variety of cases, including major residential, commercial, and mixed-use projects. A Leesburg resident, Randy has been deeply involved in a number of state and local government and community service activities in Loudoun County and the Town of Leesburg. Randy is a leader and Life Director of the Northern Virginia Building Industry Association, which was founded in part by his father, the late John R. Minchew, founder and president of the Minchew Corporation, a leading Northern Virginia homebuilder. For six years, Randy served in the Virginia General Assembly representing the citizens of Loudoun, Clarke, and Frederick Counties in the House of Delegates, and helped craft landmark legislation in 2013 that funded the Northern Virginia Transportation Authority to become the region’s preeminent force in building new roads and transit systems. Randy has served on the authority since 2013 as a voting member.