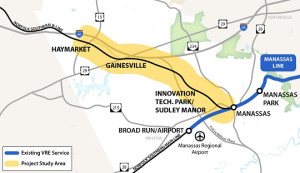 This past summer, the Virginia Railway Express initiated a $4 million planning study to determine the potential for expansion of commuter rail service to the Gainesville/Haymarket area. The study is part of a broader initiative to consider multimodal transportation improvement concepts along the I-66 corridor from Haymarket to the Capital Beltway, all of which are intended to provide new travel options and enhance reliability as the area’s population continues to grow.

Currently, service is provided along the Manassas Line with stations in Manassas Park, the City of Manassas, and Broad Run at the Manassas Regional Airport. The proposed 11-mile Gainesville-Haymarket Extension (GHX) would run along the Norfolk Southern B-Line from the City of Manassas through Gainesville to Haymarket. If approved, commuter rail service could begin in 2022. The potential for up to three stations along the route have been identified in the general areas of Innovation Park at George Mason University, Gainesville, and Haymarket. One objective of the study is to identify the appropriate number of stations to be provided and the specific locations for the stations. Other study outcomes will include cost estimates, funding sources, potential environmental effects, preliminary engineering, and initial analysis of shared use of the rail corridor with freight traffic. The study will also consider whether to continue to use the Broad Run Station, to relocate it further east or west, or to close it and convert the facility to a storage yard for commuter trains.

Several meetings will be held during the course of the two-year study to solicit community input. The first meeting was held in early November in Gainesville. VRE representatives indicated that they will incorporate into their analysis the input received at that meeting, in addition to input received online, and will present project alternatives in the Spring of 2016 for additional community input.

For more information about the VRE study, please contact Susan Flanigan, Land Use Planner, at sflanigan@thelandlawyers.com and visit VRE’s website.