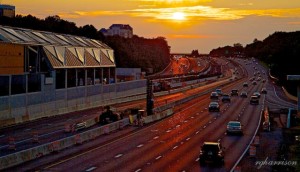 A key issue for ensuring quality, sustainable development in Reston is the important relationship between transportation and land use. The Fairfax County Department of Transportation has recently initiated a new planning effort, known as the “Reston Network Analysis,” to ascertain cost-effective ways to enhance Reston’s street network around the Wiehle/Reston East, Reston Town Center, and Herndon Metrorail Stations.

The Reston Network Analysis follows the Fairfax County Board of Supervisors February 2014 adoption of the Reston Phase I Plan Amendment. While the 2014 Plan Amendment made broad recommendations concerning a conceptual grid of streets and transportation projects, it did not provide a detailed analysis of the specific improvements needed to support transit-oriented development over time.

Accordingly, the Reston Network Analysis was conceived as a long-range study of area transportation conditions with benchmarks in 2030 and 2050. It takes into account the future demand of travel associated with development around the transit stations and considers factors such as level of service, right-of-way needs, future travel demand, road capacity, signal timing, and transit accessibility.

Aiming to identify improvements needed to support acceptable traffic conditions, the Reston Network Analysis is being conducted concurrently with the “Reston Funding Plan,” which will identify potential sources of revenue to implement the transportation recommendations in the Reston Phase I Plan Amendment.

Successful implementation of the Reston Network Analysis findings and the planned street grid should make it easier to accommodate the transportation demands associated with new development, provide more direct connections on both sides of the Dulles Toll Road, and enhance pedestrian and bicycle mobility to the current and planned Metrorail Stations.

The Reston Network Analysis is scheduled to be complete in late 2016, and FCDOT is soliciting input from both a stakeholder group and a citizen-developer Transportation Advisory Group appointed by Hunter Mill District Supervisor Catherine Hudgins. The Transportation Advisory Group has been meeting monthly since September 2015 and will hold its next meeting February 22 at the North County Governmental Center in Reston.

Additional information may be found on FCDOT’s website, located here.