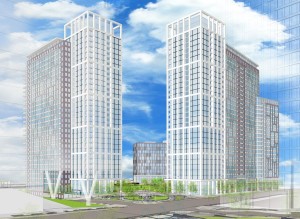 In November, the Board approved an application by the Dittmar Company to rezone the site of the former Westpark Hotel, at the corner of Route 7 and Westpark Drive, from C-7 (Regional Retail District) to PTC (Planned Tysons Corner Urban District). The site is located just over ⅛ mile from the newly opened Greensboro Metro Station. Known as Westpark Plaza, the project will include residential, hotel, and retail/service uses with a maximum gross floor area of nearly 1.5 million square feet. A hotel with up to 300 rooms and two high-rise residential towers with 1,300 multi-family rental units will sit atop a parking podium lined with ground floor retail/service uses fronting on Route 7. Reaching a height of 330 feet, the residential towers, designed by MTFA Architecture, Inc., will have a dramatic effect on the Tysons skyline.

Westpark Plaza will include a large neighborhood park in the center of the block providing a variety of active and passive park spaces for the project’s residents and the wider community. An open play lawn will accommodate pick-up games while sport courts, playground, and passive recreational areas will provide for a variety of activities. A Final Development Plan for the first tower, with 610 dwelling units and interim park space, was also approved by the Planning Commission in October. 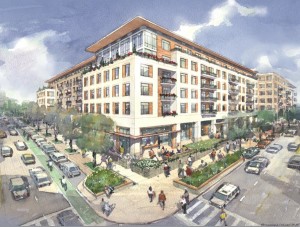 A joint venture between PS Business Parks and Kettler sought and won Board approval for rezoning a 5.7-acre parcel in the West*Park Office Park from C-3 (Commercial Office District) to PTC (Planned Tysons Corner Urban District). An existing six-story office building, consisting of 135,296 square feet of gross floor area, and associated surface parking  will be redeveloped with a 450,000-square-foot residential building including up to 400 multi-family dwelling units. Optional retail/service uses are permitted on the ground floor. Designed by Design Collaborative, Inc., this mid-rise building, located approximately ½ mile from the Tysons Metro Station, offers an alternative to the high-rise offerings being constructed closer to the transit stations.

The development of 7915 Jones Branch Drive will be the first phase of a redevelopment of the surrounding area into a new residential community with services and parks. The approval provides for three new streets that can be extended when adjacent properties choose to redevelop. A 1.4-acre park area will be constructed with the building and is the beginning of a much larger signature recreational park planned to be completed during potential future phases. A site plan was recently submitted to Fairfax County.