Our Client, Stonewall Creek, LLC, sought to develop a large campus of high-security uses and facilities on approximately 194 acres of land south of Leesburg, Virginia. It was imperative that approval be obtained for this specific location, which provided strategic access to the adjacent Hybrid Energy Park, natural gas lines, lit fiber optic infrastructure, fiber optic infrastructure corridors and non-public accesses. In addition, the Metropolitan Area Exchange East (“MAE East”) lies in Loudoun County, and is the source through which thousands of Internet Service Providers exchange internet traffic between their networks. Data centers positioned close to MAE East have a better ability to deliver content throughout the world at a lower cost of internet bandwidth.

With so much riding on a positive outcome of this application, Stonewall Creek, LLC hired Walsh Colucci’s Managing Shareholder, Randy Minchew, and Senior Land Use Planner, Kimberlee Hise based on their many other successful applications in the area and their familiarity with the staff, elected and appointed officials.

Over the objections of the Planning Staff and the Planning Commission, the Loudoun County Board of Supervisors approved the applications, paving the way for the construction of a secure business park that includes approximately 2.9 million square feet of data center use as well as another 1 million square feet of non-data center uses including; office space, warehousing, health and fitness centers, a carry-out restaurant and a firearm range, among others. 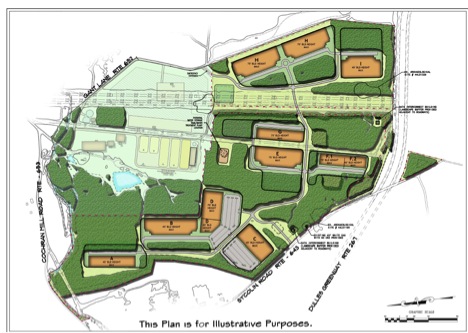