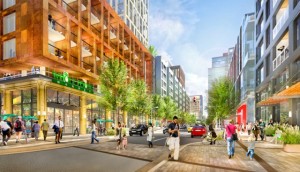 On January 12, the Fairfax County Board of Supervisors approved a large rezoning and redevelopment application for The Meridian Group next to the Greensboro Metro Station in Tysons. Known as “The Boro,” the 18+-acre site was rezoned from the High Intensity Office (C-4) District to the Planned Tysons Corner (PTC) District to permit a mixed-use, transit-oriented development of 4.25 million square feet.

In addition, two final development plans for The Boro were approved by the Planning Commission. Together, the FDPs permit approximately 2.5 million square feet of development. Shareholder Art Walsh and Land Use Planner Elizabeth Baker represented Meridian throughout the process.

The vision behind The Boro is to transform this suburban-style office park into a vibrant mixed-use environment where people can work, live, and play. A central urban park, called Magnetic Park, is the organizing element of the development plan. Meridian will be constructing a new grid of streets to divide the property into five urban blocks. Three existing offices buildings on the site will be retained and 11 new buildings, ranging in height from 75 to 400 feet, will be constructed. Overall, the development is permitted up to 1.9 million square feet of office uses, 2,010 residential units, and 430,000 square feet of retail/service uses. 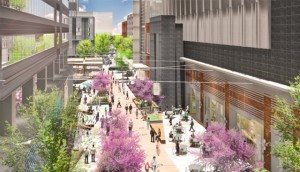 A new private street called Boro Place is viewed as the retail focal point of the development. This two-sided retail environment will include an urban-format Whole Foods grocery store along with other retail shops and restaurants at the street level of new residential buildings, creating a lively and pedestrian-friendly street. A 15-screen luxury theater by ShowPlace Icon will anchor Magnetic Park and will be flanked by an office tower and hotel in the future.

As part of its proffer package, Meridian will construct a 19,000-square-foot community library in a future office tower and an athletic field on another property it owns in Tysons.