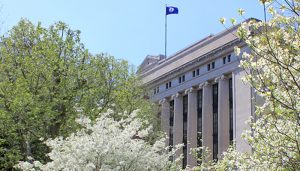 In 1946, the original developer of a subdivision in Fairfax County called Meadowbrook recorded a deed and plat of subdivision creating 13 lots, all of which were served by public streets. One of the public streets, originally called Wedderburn Place, abutted two adjoining properties that were not part of the subdivision. The Deed of Subdivision contained 12 restrictive covenants, including a restriction stating: “All the aforesaid lots shall be known as residential lots and shall be used as a residence only.”

One of the two properties abutting Wedderburn Place was a four-acre parcel, known as the “Clark Property,” capable of subdivision into eight residential lots by right under the Fairfax County Zoning Ordinance. In order to accomplish the subdivision, however, the Fairfax County Subdivision Ordinance required a dedicated public right of way at least 30 feet in width. Wedderburn Place was less than 30 feet wide where it abutted the Clark Property.

In order to get a full 30 feet of width on Wedderburn Place, a prior owner of the Clark Property purchased an adjoining lot in Meadowbrook and dedicated an 803-square-foot portion of that lot (the “Dedicated Area”) to Fairfax County as public right of way. This dedication took place in 2010. Thereafter, the owner sold the Clark Property to a developer, which obtained approval of the by-right subdivision. Even though the dedicated right of way for Wedderburn Place was now 30 feet wide, the subdivision used only a very small part of the Dedicated Area as an actual public street. A majority of the Dedicated Area was to be used for sidewalks, swales, and storm drainage.

Walsh, Colucci, Lubeley & Walsh was retained to represent Fairfax County to defend the validity of the use of the Dedicated Area as public right of way. Following a two-day trial in November 2015, the Fairfax County Circuit Court held that use of the Dedicated Area as a public right of way serving the adjacent subdivision did not violate the Meadowbrook covenants. In its ruling, the Circuit Court applied the long-standing Virginia rule that (1) valid covenants restricting the free use of land, although widely used, are not favored and must be strictly construed, (2) the burden is on the party seeking to enforce covenants to demonstrate that they are applicable to the acts complained of, and (3) substantial doubt or ambiguity is to be resolved against the restrictions and in favor of the free use of property.

In Virginia, an appeal to the Supreme Court of Virginia is not an appeal by right. The appellant must file a Petition for Appeal, to which the appellees can file an opposition. The Virginia Supreme Court then gives the appellant a hearing before a panel made up of three of the Virginia Supreme Court Justices. The appellees are not permitted to participate in that hearing, other than to observe it. If any one of the three Justices determines that an appeal should be granted, the appeal goes forward with briefing and a hearing before the full Court in which all parties can fully participate.