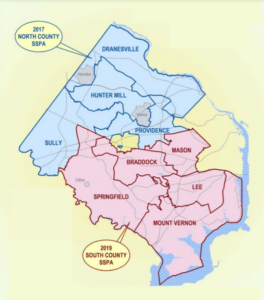 Fairfax County has completed the first step in its site specific plan amendment (SSPA) process for the South County. The SSPA process allows the submission of nominations to the Comprehensive Plan through the Plan Amendment Work Program. Every two years, Fairfax County initiates the SSPA process in turn for the North County or the South County. The last SSPA cycle in 2017 was for the North County, which included the Dranesville, Hunter Mill, Providence and Sully Magisterial Districts. The current SSPA cycle, which will continue into next year, was initiated in 2019 for the South County, which includes the Braddock, Lee, Mason, Mount Vernon and Springfield Magisterial Districts. The deadline for submission of nominations in the current SSPA cycle was December 3, 2019. The first step in the review process is consideration of the nomination by a Task Force, comprised of members appointed by the Supervisor in each Magisterial District. The Task Force considers each nomination and makes a recommendation whether the nomination should be accepted into the County’s work program. Prior to the Task Force’s consideration, the Fairfax County planning staff issues a staff report and recommendation on each nomination.

Because of COVID-19, the Task Force meetings for the SSPA process, originally scheduled in March, were temporarily postponed. Working with the County Attorney’s Office and the Planning Division, each Task Force was able to conduct public meetings electronically that allowed participation by nominators and the public. The Task Forces began reviewing nominations in July and just completed their review in September. The South County SSPA process included the submission of 26 nominations with six nominations submitted by Walsh, Colucci. The nominations submitted by our firm are located in the Lee and Mount Vernon Districts. One of the nominations was withdrawn due to the sale of the nomination property. Of the remaining nominations, Walsh, Colucci received favorable recommendations from the respective Task Force on four proposals. The nominations are wide-ranging including a consolidation of 18 parcels for mixed-use development, an option for self-storage in Springfield, and the addition of various uses to complement an industrial property on Loisdale Road.