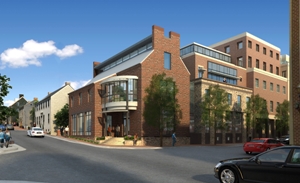 On September 6, 2012 the Town of Leesburg Board of Architectural Review granted the Certificates of Appropriateness required to implement the redevelopment of land owned by the Arundel family, and on which the Loudoun Times-Mirror (LTM) bases its operation in the heart of the downtown Leesburg historic district. This project is significant for the Town of Leesburg, since it is for the only undeveloped parcel within its downtown’s old and historic district, the centerpiece of Leesburg’s identity and character.

Randy Minchew, the managing shareholder for the Leesburg office, and land use planner, Christine Gleckner, began working with L4 Realty Capital, LLC (L4) and its representatives, Landmark Realty, nearly two years ago, in an attempt to gain approval for the redevelopment of this site. The plan was fairly straightforward: reuse the early 20th century LTM building on Market Street for retail and restaurant use, demolish the cinderblock building at the rear of the LTM building, construct a three-story retail/restaurant/office building at the corner of Loudoun and Church Streets at a scale compatible with the existing buildings in the same block on Loudoun Street, and construct a large footplate building (25,000 SF) in the existing parking area between Market and Loudoun Streets and accessed from Church Street, with underground parking proposed beneath the office building.

Since the site is located atop diabase rock, it was too expensive to construct all of the required parking to support the proposed uses underground as originally envisioned. As a result, the proposed plan included one and a half levels of below ground parking and three levels of above-ground structured parking with two levels of office above the parking. The resulting structure, however, exceeded the maximum height limit of the B-1 Community (Downtown) Business zoning district in which the project is located. The Leesburg office of Walsh, Colucci, Lubeley, Emrich & Walsh, P.C. was engaged by L4 Realty Capital, LLC to assist with pursuing a zoning ordinance amendment to increase the height limit to enable the project to move forward. After studying the proposed amendment, Town staff concluded that the height characteristics of the surrounding buildings, coupled with the topography (the site is located at a lower elevation), would not be detrimental to the character of the downtown Leesburg historic district. The zoning ordinance amendment was successfully adopted.

The structured parking component required a special exception that proved to be challenging. Although the structure required special exception approval, the proposed uses for the project did not. It was difficult to separate the special exception use from the permitted uses as they were located in a single structure of a scale that could possibly overwhelm the historic district. To address this concern, the structure, located in the middle of the block behind existing three story buildings, was articulated with varying facades and with the upper levels stepped back to meet the setback requirements of the new maximum height limitations.

This project received much public scrutiny due to its scale and its impact on the highly prized historic district. The approval can be attributed to a cooperative approach, responding to each concern raised. It is believed that Leesburg will be the beneficiary of this $30 million investment in its downtown, while retaining the historic character it has worked so hard to preserve.