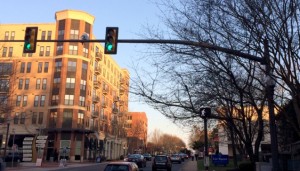 Like many communities with aging buildings and infrastructure, the City of Falls Church has seen increased redevelopment activity in recent years, and it anticipates additional development in the near future.

This is particularly true along West Broad Street (Route 7), which has historically served as the City’s major office and retail thoroughfare. Broad Street is also a heavily-traveled commuter corridor with a physical design that can inhibit pedestrian and bicycle mobility. Moreover, redevelopment efforts have, at times, been fragmented, failing to connect the established residential neighborhoods on both sides of the street.

Developed in accordance with the City’s adopted Comprehensive Plan, the West Broad Street Plan is intended to serve as a reference for property owners and developers as they contemplate redevelopment. It provides policy recommendations on matters such as land use, zoning, mobility and accessibility, innovative and appropriate building design, and the environment. The West Broad Street Plan also encourages the development of activity nodes at key intersections and identifies short-term public improvements the City can make to meet long-term goals (e.g., sidewalk and crosswalk improvements, wayfinding signage, and bicycle parking).

Interestingly, the West Broad Street Plan’s initial draft text suggested height limitations and potential layouts for new structures. Some property owners expressed concerns that inclusion of such recommendations would constrain new investment and redevelopment. In response, staff revised the plan to deemphasize height and density, and to state that such issues would be reviewed and negotiated in the context of individual legislative applications.

It is hoped the West Broad Street Plan will help the City transform Broad Street from a commuter corridor into a vibrant, walkable, and economically viable destination that reinforces the City’s well-established unique small businesses. Staff estimates that, depending on the scale of redevelopment achieved at full build-out, redevelopment of the remaining underdeveloped parcels along West Broad Street area could yield between $5.9 million and $14.2 million annually in tax revenue.

Additional information may be found on the City’s West Broad Street Plan website.