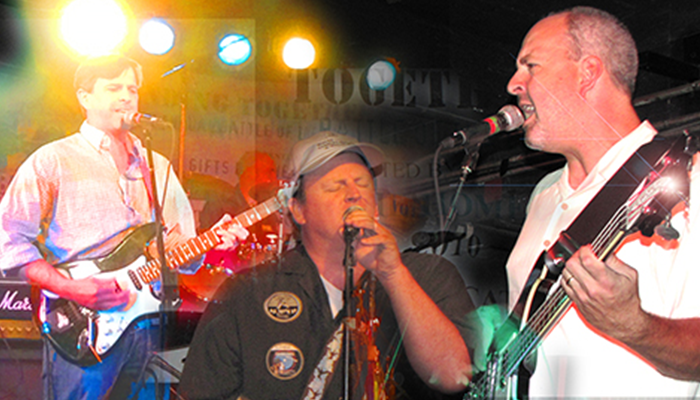 Back by popular demand! After a one-year absence, Larry & the LandLawyers will once again take their rightful place on stage at the Black Cat as part of Banding Together – Battle of the Law Firm Bands. Larry & the LandLawyers is a band comprised of three Walsh Colucci attorneys, John Rinaldi, Mark Goetzman, and Mike Kieffer, and one friend/client of the firm, Larry Clark of Donatelli Development.

This year marks the 14th anniversary of Battle of the Bands, and the 8th appearance of Larry & the LandLawyers. This year’s event will feature 17 bands representing law firms across the Washington metropolitan area. Money raised through admission fees will be donated to Gifts for the Homeless, a non-profit organization comprised of lawyers and staff from area law firms and other legal organizations that volunteer in their spare time. Fans can also make donations to GFTH by “voting” for their favorite acts online. GFTH has been serving the homeless of Washington, D.C., since 1986. The money raised through Battle of the Bands is used by the organization to serve area shelters and purchase new clothing for homeless men, women, and children.

For some insider information on the upcoming event, I caught up with John, Mark, and Mike.

John Rinaldi Litigator in our Prince William Office by day, bassist by night

On why he is excited to be back at Battle of the Bands after a one-year hiatus: “We started playing together at the Black Cat, and after missing last year due to a scheduling conflict, it is good to be back.”

On a memorable past Battle of the Bands performance: “One year my equipment decided to stop working in the middle of our set so I had to do some quick surgery on stage.”

On how the band selects their songs: “It’s fun to pick songs that are challenging for Mark to sing and fall outside his comfort zone. But no matter what we pick, he always does a great job and has fun with it.”

Mark Goetzman Transactional attorney in our Arlington Office by day, guitarist and vocalist by night

On why he is excited to be back at Battle of the Bands after a one-year hiatus: “We all enjoy participating in this event and playing at this venue. Also, all of the proceeds go directly to a very worthwhile cause.”

On the preparation that goes on behind the scenes: “We usually rehearse about five or six times. It gives me the opportunity to learn new songs and play with some very talented musicians. They are the talent. I’m just the looks!”

On his musical influences: “I grew up listening to local bands with an R&B influence. My favorites were The Nighthawks, The Slickee Boys, and The Skip Castro Band, and that’s the style I enjoy playing.”

Mike Kieffer Transactional attorney in our Arlington Office by day, guitarist and vocalist by night

On why he is excited to be back at Battle of the Bands after a one-year hiatus: “The Black Cat is a great place to play. The stage is great and the room is always fun and loud and packed with people. We have some great memories of performances there. One year, Mark sang Ozzy. Another time, I remember enjoying John looking like a deer in the headlights as he tried to fix his broken rig during our opening number.”

On how his musical past helped to get him where he is today: “I was close (well, maybe not that close) to becoming a professional musician for around 10 years. I knew Larry from a previous job. Larry introduced me to John, and we all started jamming together. That was my first connection to Walsh Colucci, which ultimately helped me to end up here after finishing law school.”

On what audiences can expect to see at this year’s show: “This year we will be playing a lot of new songs. We will also be playing the most difficult song we have ever played and, no, it is not a Taylor Swift song.”

Battle of the Bands will be held on June 22 at the Black Cat. Doors open at 6:30. Admission is $10 per person. All attendees are encouraged to support Larry & the LandLawyers by voting early and often with their donations!