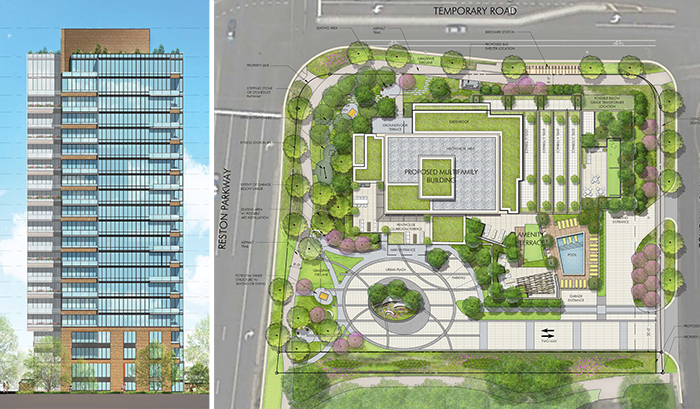 Over the past two decades, Reston Parkway has evolved into an attractive urban boulevard consisting of a series of landscaped areas punctuated by attractive high-rises. On March 20, 2018, the Fairfax County Board of Supervisors approved a new 20-story, 240-foot high-rise condominium at 1801 Old Reston Avenue, directly across from Reston Town Center.

Proposed by Renaissance Centro, the building would be the company’s fourth along the eastern side of Reston Parkway and represents the Reston’s first for-sale high-rise condominium to be approved in more than a decade. The project also provides a commitment for 16 percent for-sale workforce dwelling units—believed to be the largest such commitment in a single project in Reston’s history.

Surrounded on three sides by major roadways, the project required creativity in architecture and design. As envisioned by WDG Architecture, the building will be constructed atop a one-level podium with below-grade parking. Density has been concentrated closer to Reston Parkway, while step-down terraces along the building’s eastern façade provide a transition to Old Reston Avenue. The narrowness of the parcel necessitated a smaller building footprint, creating a more slender, airy, and porous profile than those around it.

The result is a building that offers an iconic, modern, innovative, and sustainable architectural statement that, in many respects, harkens back to Reston’s earliest structures. It will serve as an attractive gateway to the Reston Town Center area, deliver a quality-for sale project that diversifies homeownership opportunities, and provide a distinctive identity which complements the high-quality urban design exemplified by nearby residential towers.